It is well known that a complex algebraic curve \(C\) (smooth, projective and irreducible) can be seen as a compact Riemann surface \(X=X_C\) and the fact that such a curve has a real form (real equations) is equivalent to the fact that the corresponding surface has a symmetry by which we understand an anti-holomorphic involution. Furthermore, symmetries non-conjugate in the group of all automorphisms of \(X\) give rise to the non-isomorphic, over the reals, real forms of the initial curve. In addition, the topology of the set of points fixed by a symmetry gives the precise information about the topology of the corresponding real form.

In this talks we outline, I hope in a form accessible for a general audience, how different aspects of the study of complex and real algebraic curves can be reduced to certain problems concerning combinatorial group theory, due to the equivalence mentioned before, the Riemann uniformization theorem, and the knowledge of discrete subgroups of the group of isometries of the hyperbolic plane.

We shall give a survey concerning of the theory. Particular attention is planned to be payed to present typical result concerning quantitative and qualitative results for real forms and topological and homological properties of certain distinguished loci (singular and real) in moduli space \(M_g\) of complex algebraic curves of given genus \(g\). Some application to \(4\)-manifolds are planned to be presented if time permits. The talk will be in English, projector is planned to be used throughout and pdf-slides will be available on individual requests. 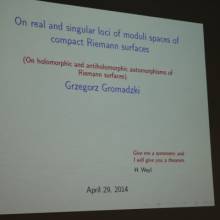