In 1948, R. P. Feynman expressed the integral kernel of the fundamental solution of the Schrödinger equation, using a path integral. Path integral was a new integral over all paths. Feynman explained his new integral as a limit of finite dimensional integrals, which is now called the time slicing approximation. Furthermore, Feynman considered path integrals with general functional as integrand, and suggested a new analysis on a path space with the path integrals and the functional derivatives. However, in 1960, R.H. Cameron proved that the measure for path integral is impossible mathematically. Therefore, using time slicing approximation, we give a fairly general class of functionals so that Feynman path integrals with smooth functional derivatives have a mathematically rigorous meaning. More precisely, for any functional belonging to our class, the time slicing approximation of Feynman path integral converges uniformly on compact subsets of the configuration space. Our class of functionals is closed under addition, multiplication, translation, real linear transformation and functional differentiation. Furthermore, the invariance under translation and orthogonal transformation, the interchange of the order with Riemann-Stieltjes integrals and limits, the integration by parts and the Taylor expansion formula with respect to functional differentiation, and the fundamental theorem of calculus hold in the path integrals. 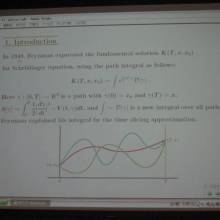