This talk presents a theory of finding explicit formulas for heat kernels for both elliptic and sub-ellipticoperators. We are using the path integration method, the variational method and the Fourier transform method. Depending on the symmetry, geometry and ellipticity, some of the operators can be solved better by some methods than others. One of the large classes of operators studied is the sum of squaresoperators. These operators might be either elliptic or sub-elliptic. The methods for finding the heat kernel depend on the commutativity condition of the operators. If the operators do not commute the Trotter formula applies and the heat kernel is computed using the path integral method. This method comes from Physics and it was used to compute the propagators for the SchrAodinger equation. It was initiated by Feynmann in early 1940s. Another class of operator investigated is the operators with potential. The case of the linear and quadratic potentials can be solved explicitly by path integral methods by a formula called the Van-Vleck formula. They can also be solved by geometricmethods which encounter classical action and volume function issues. The operators with power potential greater than degree 2 do not have in general a closed form solution. Geometrically speaking, this reduces to infinitely many geodesics between two points whose energies cannot be obtained in a closed form solution in terms of the boundary points. The heat kernel depends on the contribution of each geodesic. 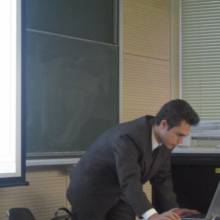