In 1999, Iwan Duursma defined the zeta function for a linear code as a generating function of its Hamming weight enumerator. It can also be defined for other homogeneous polynomials not corresponding to existing codes. If the homogeneous polynomial is invariant under the MacWilliams transform, then its zeta function satisfies a functional equation and we can formulate an analogue of the Riemann hypothesis. As far as existing codes are concerned, the Riemann hypothesis is believed to be closely related to the extremal property.

In this seminar, Duursma's theory is introduced, and we show there are abundant polynomials invariant by the MacWilliams transform which satisfy the Riemann hypothesis. The proof is carried out by explicit construction of such polynomials. 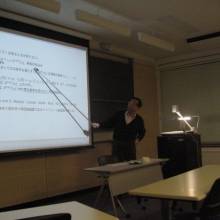